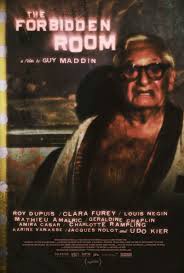 “The more manipulated things are, the less likely people are to be misled.”

An a propos line for film auteur Guy Maddin to offer up in response to an interview question concerning the blurry line between fiction and non-fiction created in some of his films. That’s the allure of speculative art really, one can create a world as strange as one can imagine: the weirder it is, the less likely we are to be confused.

Much has already been written of Maddin, as is true of any artist who has attained even a nominal level of fame in 2015, but many of Maddin’s biggest fans are film geeks, and I mean film geeks; those people who, like Maddin, enjoy destroying, tampering with or in any other way possible interfering with the medium, the raw material, of film itself.

I am not one of those film geeks.

I fall into the other category (assuming one exists): I obsess over the style, the sensibility of a filmmaker’s on-camera aesthetic and, his/her engagement with the art and history of film that takes place on the other side, not on the inside, of the camera.

So I’d like to offer a counter-reading to Maddin’s maniacal, destructive tendencies and his nonsensical, non-linear storytelling: Guy Maddin as film history obsessive.

When it comes to evoking the Hollywood of yesteryear (or perhaps, on occasion, a speculative vision of Hollywood that never was), no contemporary filmmaker can beat Wes Anderson. Well, almost no-one.

I’m still a Maddin newb, but, for what it’s worth, The Forbidden Room “old-hollywoods” Anderson under the table.

Maddin has a penchant for tampering with the film upon which he films. He burns it, rips it, smashes it and does a whole hell of a lot of other things I’m sure I’m unaware of (again, not a film geek). What all of his tampering adds up to is not a just a trippy, surreal vision of the world (although it is certainly that), but rather the incongruous evocation of a very early movie, you know, poor quality, or poorly restored old film; the scratching, the dust, the shakiness.

While The Forbidden Room is immediately recognizable in the low-quality sense of an old Hollywood film, it’s also going to inevitably in 2015, be associated with the lo-fi, polaroid aesthetic which has seeped from the culture’s edges into the mainstream.

Wes Anderson is aware of our cultural obsession with the look and feel of the past and he’s been scrupulously recreating it for over a decade.

Guy Maddin has not, necessarily, his films have always been experimental but not in the Anderson sense, but with Forbidden Room he’s given the film geeks of the world who participate in a collective eye-roll whenever a new Anderson film hits the megaplexes (twee much?), something else to latch on to; a psychotic fever-dream of a Hollywood homage.

There’s a bit of everything pulp in Maddin’s film, specifically lots of bits, all with only the most tenuous of connections, making the film not for the easily distracted. There’s very little (seemingly) logic at play in The Forbidden Room, something to which Maddin’s humorously dark characters vehemently attest, instead we get a rather less than lucid fever dream of images, scenes in which Maddin attempts to evoke everything from Jules Verne’s undersea adventurers to Universal’s run of B-grade sci-fi movies in the 1950’s (think tropical volcanic islands and crass portrayals of natives) to German expressionist classics like Dr. Caligari and Pandora’s Box.

There’s actually a lot of Murnau and Pabst in The Forbidden Room; over-fictionalized, over-dressed, bizarro characters straight out of Pandora’s Box all making brief appearances inside other stories, before quickly becoming the film’s past.

Ostensibly a film is about a woodsman engaged in an attempt to rescue a damsel in distress who has been kidnapped by wolves when he accidentally stumbles into a submarine trapped far beneath the ocean’s surface (yup). The intervening vignettes (the tropical island, the excruciatingly skilled doctor and his horribly mutilated motorcyclist patient, the tragically blind woman and her philandering husband, the windmill-residing count and his garden boy and the life-insurance hawking skeletons) they’re all just the filler, I guess (PS is that enough to make you want to watch this movie? If not what is wrong with you?)

It’s not supposed to make sense, if you hadn’t caught on. Maybe the intervening episodes of the film are all a part of our kidnapping victim’s drug-addled stupor as she lies with her captor? Probably not but anyways who cares. I started this review defending the film on its aesthetic merits and that’s where I end.

The appeal of the film lies in part in the meta-element Maddin plays with, the silent film homages in the form of title and dialogue cards, for example, and in the deciphering of his visual allusions, in getting lost in them. It’s a masterful example of new technology being utilized to pay respect to the old.

Which is true isn’t it? If everything is a remix, and I strongly believe it is, Maddin is consciously or not, asserting that an artist can be at peace with that while still beautifully adding to our canon.