“Time in Kafka is always broken. Every moment leads back to itself. Chronological and eternal.” The opening (and closing) lines for Len Jenkin’s new play “Time in Kafka” could not be more concise in their description of Kafka and the play itself, a fun romp through a plot as confusing and twisted as any Kafka ever concoted, although maybe not quite as philosophically challenging. 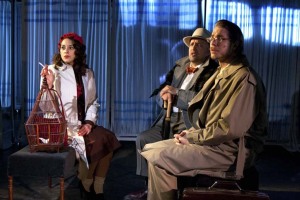 Undermain Theater’s world premiere production of Jenkins’ play treats the subject with the lightness it merits. Professor Spellman, recently fired from his teaching position at a university due to his inability to divorce his cerebral philosophizing on Kafka’s life and work from his job teaching freshman literature, is visited by Kafka in a dream. Kafka reveals the existence of a forgotten manuscript hidden in an Italian clinic Kafka visited in 1913.

The play follows Spellman as he abruptly departs to the Italian clinic only to find a group of ridiculous, and in Undermain’s production, hilarious patients and staff who take Spellman on a convoluted and nonsensical journey to understand the nature of the clinic and find the lost manuscript.

Little of the play makes sense, from the “healing dances” Dr. Hartungen advises his patients to perform, to Boothby’s (a patient at the clinic) relationship with his “niece” Charlotte.

The melodramatic music and ridiculous characters make the play fun, but with the overlying sense that life is farce.

Time in the clinic is interminable, no-one seems to know how long they have been there or have any intention of leaving. Their laissez-faire attitude towards checking out is implied explicitly in their participation as the voyeuristic audience for Boothby’s attempted murder of Spellman; events in the clinic repeat and repeat.

Has Spellman come in search of Kafka’s lost manuscript before? Has Anna, the tubercular young woman who has mistaken Spellman for Kafka (or discovered Spellman is Kafka) been here before? 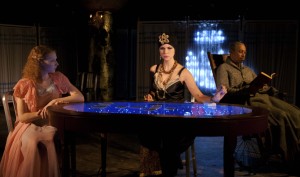 As in a Kafka novel, events repeat in an endless cycle and the plot is not meant to be accessible, just as our word Kafkaesque has come to describe; the play is senseless, and exhibits a disorienting complexity.

That doesn’t make Jenkins’ ride any less enjoyable. With the humor implicit in the script and Undermain’s interpretation of Jenkins’ characters under the masterful hand of director Katherine Owens, audience members would be in a sore mood if they did not enjoy the ridiculous nature of the play.

And just as Spellman opens and closes the play with the prophetic words, “Time in Kafka is always broken. Every moment leads back to itself. Chronological and eternal,” Spellman’s, and supporting characters own experiences in the convoluted plot support the fact that life for Kafka is surreal and distorted, it doesn’t have to, and most likely won’t make sense.